I have a 2 1/2 yo and a 6 yo, both can easily use the camera and love the instant print option! Hours of fun! Love this camera. My 6,4 and 2 year old all love and use it. Gets them outside!

We had issues with one of our cameras and we contacted customer service. They were super kind and helpful.

My daughter absolutely LOVES this camera! She is 4 years old and she loves taking photos of our family and fun things she sees when we go on trips! It gives her a sense of independence and creativity! Such a great product for kids!

My four year old only needed a little bit of help to get started and has been taking and printing pictures all weekend. Its so fun to see what he decides to capture. We love it!

I absolutely love this little camera. It’s meant for kids, but as a school librarian, it is perfect for me at school! I’m able to snap a picture of something and send my student away with a copy immediately, which leaves them delighted! I love that the photo paper is inexpensive and I can continually use it. I can’t wait to see what else this company comes up with! 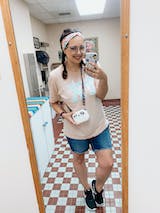 This camera was a total hit with my 6 year old. He has loved the video feature and using the selfie camera. We have experienced two issues: (1) the fixture connecting the lanyard charging band to the camera snapped the first day he used it, and (2) it seems to overheat after a period, acts as though it is out of charge and shuts off. Leaving it off for a minute to cool and then turning back on makes it work again - just causes some concern for how long the camera may last before it fails.

Such an adorable camera! My kids (almost 5 & 9) have no problem operating the camera and love that it prints! The quality and ease of use is great!! 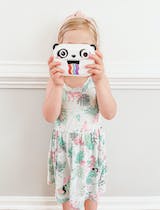 The best kids camera ever! My daughter loves it and has no stopped playing with it since she got it! She has captured the cutest memories that we will look back on forever! Can’t recommend enough!

My son absolutely loves the camera! It’s super easy to use.

I got the Meowie Model K for my DD. The camera is very light and the interface is easy to use for a 6y.o. I love the lanyard that doubles as the charger for the camera. The audio on the video clip is decent given that this is only a kids cam. I do wish that the download via wifi feature will allow the user to download to a PC. It seems like you have to download the app thru your phone before you can take advantage of the wifi download feature. My order arrived very quickly and I actually received an email keeping me updated with the progress of my order --- very good customer service i would say! all in all, this is a good first camera. My daughter loves it!

Got this the other day and the kids have been wandering around taking pictures of about everything.
Mostly pictures of their legs and the floor and stuff, but sometimes they get a good one.
The selfie camera is a really nice feature. The interface seems to work well and be pretty robust.
We had bought a different kids camera off Amazon a year or so ago and it would just freeze randomly and you couldn't do anything with it until the battery died and you could try again. Had promised the kids we would get a replacement someday but hadn't really found anything, then this popped up in a Facebook ad and I bought it five minutes later. Very happy so far.

The charger lanyard thing is a neat idea. Seems to work pretty well.
The battery doesn't seem to last as long as I'd like, but that's about the only complaint I have about the camera.

I really like how easy it is for kids to replace their own papers in the cameras. This pack is a good amount so the kid has plenty to play with but not too much that it gets lost or broken. My 7 year old loves his panda camera! Thanks!

I can not review the camera as it has not been received by us yet. It has been posted to a friend in the US and she will bring it to us in Greece around the end of June. Thank you

Just what I was looking for in an introductory camera for my little one. The emphasis on photography and creativity without the addition of “games” and busy work allowing for greater child-parent interaction and free thinking.

I have an instax mini that I bought for my kids to use, but the film is so expensive that it’s completely inappropriate for the youngest members of the family.
The Model P is PERFECT. The operation is simple enough that my 4 year old can use it unaided, but with enough customization that my 9 year old enjoys it too.

Best part is that I don’t feel like I’m wasting money when I see that my son has printed 8 photos of our floor in one day! A
Zippy the Sloth - Model K Anne Marie
Great for a 4 year old!

My 4 yo son loves this camera! He was able to use it right away, and he has been playing with it ever since. He has dropped it several times already, and the silicone casing is doing a great job. Very happy with my purchase. Great size for his hands, enough « complexity » (photo, video, album) for real usability, photo quality great for child use. VERY glad that there are no games included, it is used just as a camera!

On the down side, i am not in love with the app, but transfer with data card works fine for us!

The Model K is a great starter camera for a 3-5 year old. My daughter had been asking me about having her camera and so I went searching for something that would be a good fit. I was really happy that the Model-K fit the bill. The camera is the perfect size for small hands and yet has a large screen. The soft protective rubber keeps it safe from the occasional fall, or even just knocking into things, like when she climbs up the ladder to her play house. The camera is easy to charge and easy to operate. I found the app a little cumbersome and just ended up transferring pictures directly from the SD card. Otherwise I would definitely recommend the camera.

I think this is a wonderful gift for my grandddaughter. A friend of ours has one and we enjoyed watching him take puctures

S
Zippy the Sloth - Model K Stefani
Not 3yo proof

This is an adorable ok camera. Super cute 3yo birthday present. Pictures aren't amazing, but fine. Screen UI a little clunky. Transferring photos with the app is too slow and buggy. 3yo was able to manipulate the screen and took a lot of photos, which he did enjoy.

On the first day he ripped the lens cover off of the main camera piece. So that is now loose. Then he moved on to removing the silicone layer of the camera itself. Less than a week after his birthday, he inadvertently dropped the bare camera into a cup of water. I could see water droplets in the screen, so set it aside to let everything dry. The thing proceeded to turn itself on and off over and over again for maybe 20-30 minutes? The screen image got worse each time. I imagine had the outer cover been on it would have survived, but still, why would it turn itself on like that?

Anyway, I don't know why I thought this would be water resistant, but it seems like that should be a given with a product for such young kids. Hopefully I can convince him to let me replace it with a different camera, but the sloth character is very cute and distinct so I may be stuck getting another one of these. 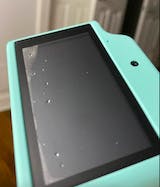 Thank you so much for your feedback.

I am happy to hear that your 3 years old was able to manipulate the screen and took a lot of photos. Model K is the most straightforward cameras available thanks to the touchscreen and intuitive UI. Many product reviewers have tested many products and rated our cameras the most easy-to-use product available.

Please understand that the camera is not waterproof. In fact, we are working on a real waterproof camera (unlike most waterproof cameras that are not truly waterproof), but the cost of manufacturing is quite high and we are trying to find a best solution.

I will send you an email shortly to help you with the next steps. I am glad that you'd still consider ordering the same camera for your boy. We do everything we can to satisfy customers who trust our brand.

My daughter loves the camera's looks and functions and it's really easy for her to use. She took over 100 pics with it when she first got it and had an amazing amount of fun